My latest story in The New York Times’ global edition is on free trade zones, which have spurred billions in foreign direct investment into the U.A.E. They are also attracting less savory enterprises.

RAS AL KHAIMAH, UNITED ARAB EMIRATES — As free economic zones grow in size and number across the globe, they are increasingly popular spots for illicit trade.

Counterfeiting and money laundering can flourish in these zones, typically manufacturing and warehousing sites near ports and airports, where governments relax tax and regulatory requirements to attract foreign investment and ease the rapid movement of goods.

“Organized crime and counterfeiters are very resourceful and creative,” said Stuart Jones, a U.S. Treasury financial attaché based in Abu Dhabi and Riyadh. “They are also interested in free-trade zones to exploit the very ecosystem governments created to contribute to economic development.”

Globally, there are about 3,000 free-trade zones in about 135 countries, through which billions of dollars’ worth of goods are transferred every year. Most of the United Arab Emirates’ 36 free-trade zones are in Dubai, but other emirates are also creating them as investment vehicles, including Masdar, a green-energy zone in Abu Dhabi. The oldest free-trade zone in the Emirates, the Jebel Ali Free Trade Zone, is one of the largest in the world, and handles 11 million containers each month.

That volume is reflected in the crime statistics. According to data from European Union customs, the Emirates were the No.2 source of counterfeit goods, after only China, in 2008 and 2009, said Omar Shteiwi, chairman of the Brand Owners Protection Group, an anti-counterfeiting group based in the region.

The zones’ susceptibility to illegal activities was also cited earlier this year by the Financial Action Task Force, an international watchdog organization based in Paris that co-ordinates and monitors government efforts to block money laundering and terrorist financing. Free-trade zones do improve economic opportunity, but the characteristics that make these enclaves attractive to business also create chances for illicit programs that can finance terrorism, the task force warned.

Screening of cargo is “often carried out by random selection more than on risk assessment or indicators,” the task force found. “No clear procedure, authority, or documentation is identified to organize and execute the examinations.”

Security in free-trade zones was a topic recently at the 10th World Free Zone Convention and Exhibition held in the emirate of Ras Al Khaimah.

“You now have to factor in the globalization of illicit trade: How to balance trade efficiencies and low cost with the need to supervise what’s going on?” Pat Heneghan, who heads global operations against illicit trade at British American Tobacco in London, said as part of a panel discussion.

Mr. Jones of the U.S. Treasury said he believed that there should be a way for zones to share trade data and best practices with one another, essentially policing activities and creating a blacklist of zones that do not comply.

But Oussama el-Omari, chief executive and director general of the Ras Al Khaimah Free Trade Zone, said he did not support what he considered a punitive approach.

“The U.A.E. already has a system in place; there is world-class security, checking and screening standards,” he said, noting that Dubai customs regularly tracked and seized items ranging from toothpaste to medicine suspected of being counterfeit goods.

Instead, Mr. Omari said, he would like to see an umbrella organization formed that could create international standards for best practice and peer policing.

No such agency now exists. The World Free Zone Convention, which is based in London and is the organizer of the annual conference, “is a meeting point for zones rather than a membership body,” said its chairman, Graham Mather.

Businesses find the semiautonomous free-trade zones especially attractive because, unlike in the country proper, where a local partner must own at least 51 percent of any company, foreigners may own their operations outright.

The U.A.E. has specifically felt some pressure to tighten oversight on trade with Iran, with which it has had a long history of commercial links.

Ras Al Khaimah is just across the Straits of Hormuz from Iran, but this summer, to comply with sanctions, its free-trade zone essentially stopped issuing new licenses to Iranian companies, as stepped-up disclosure and other requirements caused applications to dry up, Mr. Omari said.

Last month, the U.A.E. Central Bank signed an agreement with the Dubai Multi Commodities Center requiring that free zone to share information on any financial transaction suspected of having links to money laundering for the possible purpose of terrorist financing. The agreement requires that a compliance officer will operate within the free zone and monitor financial transactions.

In September, the Dubai Financial Services Authority, which regulates activity in the Dubai International Financial Center free zone, announced that it had frozen the accounts of the Dubai branch of the Persian International Bank.

Still, increased oversight or no, the commercial ties that bind the Emirates and Iran are strong. Between panel discussions at the trade zone convention, Abadollah Kamkar, a managing director of the Salafchegan Special Economic Zone, quietly approached attendees, distributing pamphlets outlining the features of his zone, which is based in Qom, Iran. “Come to Iran,” he said. 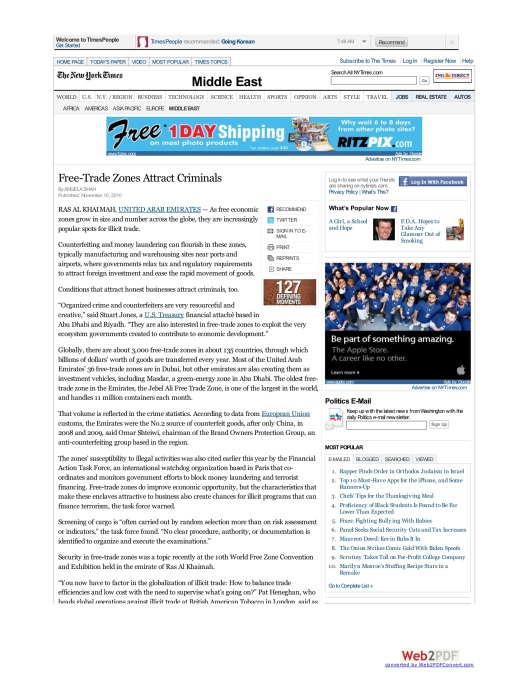 1 thought on “A cost of free trade”

After a lifetime of looking east –New York, Washington, the Gulf, India — a new chapter has begun in Los Angeles. Follow along as we explore a new frontier.